Whether you’re a local or a tourist, you expect warm days and sunshine on the beaches of Southern California.   After all, the region is synonymous with beaches, bikinis, and surfing.

If you’re planning trip to the beaches of Southern California you need to understand the weather patterns.

Yes, sunshine occurs year round, but it’s not always warm and sunny at the beach. In fact, there are a few months you should be aware of that have considerable cloud cover.

If you’ve never heard of these terms, it refers to the presence of the marine layer and it’s important to know when it’s most prevalent.

Understand the marine layer help maximize the amount of sun you get at the beach.

What Is The Marine Layer

This air mass develops as a result of inversion, which occurs when warm air is met by cool water temperatures.

The result of warm air and cool ocean temperatures creates a hazy cloud that hangs over the coast and ruins beach days. 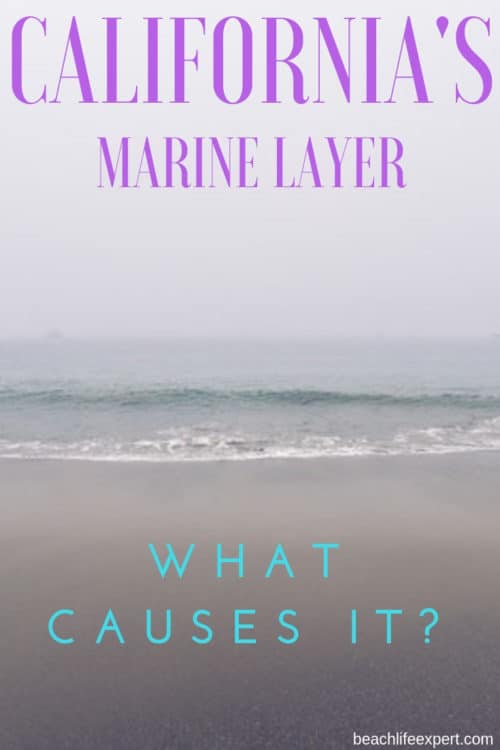 When Is The Marine Layer Most Prevalent

In the section above we learned that the marine layer forms when warm air meets to cool water. It makes sense that this most frequently occurs in May and June, although there can be a marine later in the year.

The marine layer usually occurs in the morning and more often than not, it burns off by the afternoon. As the sun approaches midday it evaporates the marine layer.

The months of May and June tend to be worst for the marine layer – it often lasts all day.

Southern California has a unique coastline in that it’s receded compared to the rest of the State. The Catalina Eddy is a point on the Southern California coast (near Santa Barbara) that causes northwesterly wind from Central California to rotate cyclonically.

This occurrence has a profound impact on the Southern California climate.

If you’re planning a trip, it’s wise to avoid months with the highest chance of experiencing a marine layer. However, don’t let that deter you if your timeframe is limited.

During May and June, there are plenty of days that clear up but it’s hit and miss.

I recommend aiming for a trip to Southern California beaches in the late summer and even into early fall.

Some of the best times are in September when kids have gone back to school and the weather and water temperatures are warm.

With a little planning you can make your Southern California beach trip successful, just make sure to avoid the marine layer!