Sea urchins are amazing creatures. They’re made up of almost 1000 species, including the sand dollar (yep sand dollars are a sea urchin).

We usually see them in tide pools where they position themselves against rocks and eat decomposing matter. Their main diet is algae but they’re omnivores so they eat a variety of small sea life.

Unbeknownst to most people, sea urchins can have tiny legs (spines and tubes) that allow them to move – it just takes them a long time. If you’ve ever seen a live sand dollar you can see tiny hairs on the exterior which allow it to move across the bottom of the sea.

Similarly, sea urchins with larger spines can use them to maneuver around too.

Sand dollars aren’t something to worry about but if you’re like me the word “sea urchin” immediately brings to mind long sharp spines.

Sea urchins use their spines for protection and unfortunately, humans occasionally fall victim. In this article I’ll share 6 tips to avoid stepping on a sea urchin.

6 Tips To Avoid Stepping On A Sea Urchin 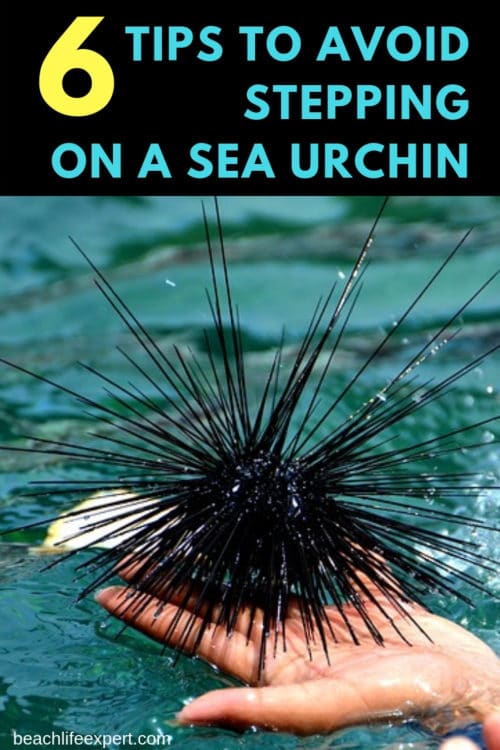 Most public beaches have signs that alert beachgoers of potential risks. I routinely see the following signs:

I’ve never seen a sign for sea urchins but I’m sure they exist. Some beaches will be known for having a high amount of sea urchin inhabitants and I recommend speaking with locals when you arrive at an unfamiliar beach.

Sea urchins are commonly found near rocky areas and tide pools. Why so?

In fact, I’d guess that most people step on sea urchins when they are exploring tide pools. Tide pools are full of rocks and crevices and have their own active ecosystems.

As long as you’re careful, you shouldn’t worry about stepping on a sea urchin in a tide pool. If you’re walking in water near rocky areas you should be extra careful because sea urchins might be hard to see underwater.

If you’re new to a particular beach, seek out a lifeguard and ask about marine life in the area. A lifeguard can advise you on the sea creatures but also share helpful information on currents, the best swimming areas, and water quality.

Lifeguards will know the beach better than anyone!

One of the easiest ways to protect yourself from stepping on a sea urchin is to observe others. At most large beaches there are designated swimming areas that are known to be safe.

This doesn’t mean there isn’t a risk, but it’s probably the best spot for a number of reasons including the current.

Spiny sea urchins tend to avoid areas with currents and waves – they prefer more stable conditions (fewer waves) so they aren’t pushed around.

I’ve swum on my fair share of rocky beaches. In fact, when I feel a rock area in the ocean I get a little nervous about stepping on something.

If I feel soft sand under my toes I feel much more confident that I won’t be stepping on marine life.

To avoid stepping on a sea urchin you can always float in the water without putting your feet down. Snorkelers to this when exploring rocky areas and surfers do the same when catching waves over a reef.

My last tip is to do your homework. If you’re reading this article you’re on the right track.

Learning about the environment sea urchins prefer can give us a great idea of what we can expect. For example, I know that sea urchins are found in tropical and temperate climates and near the ocean surface they prefer rocky areas that offer protection to beaches with rough waves.

It’s also important to note that many types of sea urchins don’t have spines. Sand dollars, shingle urchins, and many others have smooth exteriors and won’t injure you if you pick them up.

The more we understand them, the less we have to fear!

However, there are a number of steps we can take to protect ourselves. These include:

I’ve spent a lot of time in the ocean and I’ve always been fearful of stepping on a sea urchin. Guess what? I never have and probably never well. But it’s always good to be prepared.

If you’re exploring tide pools I’d be extra careful as it’s where you’ll find spiny sea urchins. It’s easy to slip on a rock or misstep!

Thanks for reading another Beach Life article. Be sure to check out the homepage for more beach safety tips!