Although the chances are slim that you’ll be stranded on a deserted island, you may have wondered how you’d access drinking water.

Can you drink the ocean water? Of course, it wouldn’t taste good but could it help you survive?

The vast majority of Earth is made up of ocean water and knowing what’s in it can help us understand why it’s so salty. Understanding the ocean makes one thing clear: it’s not something we should drink.

If you’re thirsty, ocean water won’t help the problem. It will only make matters worse. Because of the high salt content, drinking ocean water leads to dehydration, which is the same reason you were thirsty to begin with.

There are also additional symptoms you may experience after drinking ocean water.

In this article we’ll look at why you’d drink ocean water, what it does to the body, and the symptoms you might encounter when drinking it. First, let’s look closer at the ocean

Did you know that 71% percent of the Earth is covered by water? Only 2% of the water is pure. Yep, that means 69% of the water on Earth is ocean water.

So, why is the ocean so salty?

There are over 70 minerals found in the ocean> Some of those minerals come from the deep ocean floor, while others come from land.

“As the rain erodes the rock, acids in the rainwater break down the rock. This process creates ions, or electrically charged atomic particles. These ions are carried away in runoff to streams and rivers and, ultimately, to the ocean. Many of the dissolved ions are used by organisms in the ocean and are removed from the water. Others are not used up and are left for long periods of time where their concentrations increase over time.

Two of the most prevalent ions in seawater are chloride and sodium. Together, they make up over 90 percent of all dissolved ions in the ocean. Sodium and Chloride are ‘salty.’”

There are plenty of living bacteria and organisms in the ocean as well. Every day, marine species are born while others die and decay.

It’s unpleasant to think about but millions of ocean creatures are defecating in the ocean every day.

Why You Would Drink Ocean Water 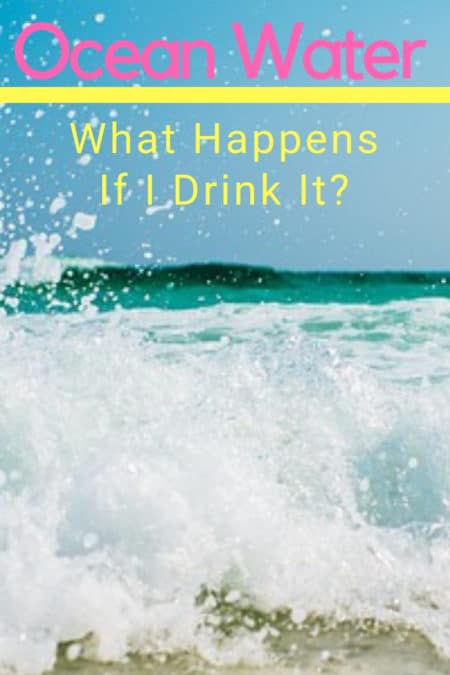 There are a few instances when you’d drink ocean water. Let’s review the situations.

The only time I’ve ingested ocean water is by accident. When I’m surfing or bodyboarding, I’ll get tossed around by the waves.

Ocean water might go up my nose and down my throat. This doesn’t feel good but it happens often.

Occasionally I think I’m above the water’s surface and I’ll swallow, only to realize that ocean water entered my mouth.

As a kid, you might be swimming in an ocean and think to yourself “I wonder how it tastes”. After all, it’s much more convenient to drink the water you’re swimming in than to walk the beach and look for a water fountain.

Maybe you can’t find a public water fountain and you forgot cash to buy water. You might try the ocean water out of desperation.

The last scenario and one that I hope no one ever encounters is being stranded on a deserted island. If this happens you’re in big trouble, but you’ll be in bigger trouble if you drink the ocean water.

Look for fresh water near the center of the island. Water can also be found in coconuts, on leaves, and from rain!

What Happens If We Drink Ocean Water

Drinking ocean water disrupts the natural balance of sodium concentration outside our cells. Ocean water is 4 times saltier than the salt found in our body (that’s a big difference).

Our body will do its best to get rid of it by way of urine.

In order to process the salty water, our kidneys need help in the form of dilution.

As a result, our body releases fresh water from the cells in order to processes the ocean water. Loss of fresh water from our cells helps to create a better balance of water and sodium, however, because water stored in our cells in lost and isn’t replaced by fresh water, the process causes dehydration.

Slowly but surely the body released water reserves to dilute and process the salty water. In order to solve one problem (ingesting ocean water), the body encounters another (loss of stored water).

Let’s take a look at some of the symptoms you may encounter from drinking ocean water.

How To Get Clean Water From Ocean Water

There’s an easy hack to remove salt from water and it’s done through evaporation.

Why Don’t We Process Ocean

You might be surprised to learn that the ocean is a source of freshwater. In recent decades, the lack of available freshwater has spurred innovation to process our ocean water into fresh water used for drinking and agriculture.

The process, however, isn’t perfect. Desalinization removes many of the “good” minerals from our water. It also creates a by-product of salt that must be deposited elsewhere.

The process is continually being refined and has made major advancements in recent decades.

So, what happens if you drink ocean water?

If you happen to ingest a small amount while swimming, don’t worry. Your body can handle it and will rebalance itself within a short time.

If you happen to ingest a large amount of saltwater due to thirst or mistake, you’ll want to monitor your symptoms and talk to a medical professional.

Next time you visit the beach, take some plastic, a shovel, and a cup. You can try to distill your own water from ocean water. It’s a fun experiment for kids and it’s always nice to be outside near the beach.

Thanks for reading another Beach Life blog post about drinking ocean water. Leave your tips and comments below.