If you’re headed to the beach you might be curious about how to protect your family from jellyfish and what to do if you are stung by a jellyfish. There is a lot of information on the internet about jellyfish stings and not all of it is accurate.

In this article we’ll take a deeper look at jellyfish, the symptoms of jellyfish stings and how to help with management once you are stung.  Remember, 9 times out of 10, jellyfish won’t be an issue at the beach.

It’s still important to be familiar with jellyfish and what to do if you’re stung.

My Experience With A Jellyfish Sting

I’ve grown up around the beach my whole life and spent 100’s of summer days at the beach.  Very rarely have I been concerned about jellyfish.

In fact, the jellyfish threat in California is minimal.  I’ve been stung in 2 places outside of California, Mexico and Florida.

In Mexico, the blame was mostly my own.  I saw jellyfish all over the beach.  A current had swept 1000’s of jellyfish onto the beach and I still decided to go into the ocean.

In hindsight it wasn’t a smart move.  I was stung and endured the pain for a few hours afterward.

In Florida I there was no evidence of jellyfish on the beach.  I was caught off guard by a jellyfish in the water and felt its effects for hours afterward.

Luckily neither of these jellyfish had strong enough stings to cause a trip to the emergency room.

Related: Best Natural Sunscreen Safe for Kids and the Environment

Jellyfish are amazing creatures.  They actually look beautiful and move in a graceful manner in sync with the ocean rhythm.

The main part of their body is a bell shape with long (or short depending on the species) tentacles that sway in the ocean. Often their bodies are translucent.

I’ve even seen some jellyfish that exhibit light that can be seen at night (imagine being able to light up your body).

Sometimes jellyfish appear in large groups on beaches during “blooms”.  Jellyfish blooms occur partly due to currents.  Although jellyfish can propel themselves in different directions, they are susceptible to strong currents.

What Jellyfish Are Common in North America

On the coasts of North America many species of jellyfish can be found.  There are a few that you should watch out for including:

Fairly easy to recognize on the beach due to its small size and purple color.  Its cousin is the blue bottle (blue color) found in Australia.

In California, I’ve seen Man O’wars wash up on the beach in groups (smacks or blooms)

The largest jellyfish species known to man.  8 feet wide x 100 feet long.  Enjoys cooler waters and has the potential to sting 100’s of swimmers from 1 jellyfish

How Many types of jellyfish are there

There are over 200 types of jellyfish throughout the world.

The Box Jellyfish is the world’s most infamous jellyfish species and exists off the coasts of Australia and Southeast Asia.  Since the 1950’s the Box Jellyfish has caused almost 6,000 deaths.

The Box Jellyfish has 24 eyes and 4 brains!  Thankfully we don’t have to worry about this one in the U.S. 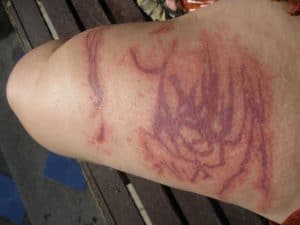 As you can see from the photos, jellyfish stings usually appear as raised welts.  The marks are often in the form of squiggly lines from their tentacles. It’s like free-form art.

The burn-like marks on the photo (left) are likely due to the tentacles being stuck to the skin for a long period of time, or, as the skin heals it may become scab-like and turn a darker color.

The photo on the right shows a typical, non-serious sting that will be painful for a few hours and subside.

Sometimes tentacles lightly brush against skin, other times the tentacles break off and become stuck to the skin.  Larger species of jellyfish will cover more area on the body however jellyfish size doesn’t necessarily equate to the amount of symptoms as small jellyfish are some of the most dangerous on earth.

How long does a jellyfish sting last

A sting should subside within 24 hours if cared for properly.  The wound should be cleaned regularly and sterilize to avoid infection.

If the pain or rash worsens after 2-3 days, seek a doctor for further medical attention and treatments.

A prescription for antibiotics may be necessary.  If you are swimming in an area with dangerous jellyfish species, Box Jellyfish of Australia perhaps, seek medical attention immediately.

Luckily, most jellyfish stings in North America are treatable at home, depending on the severity of the sting.

What helps a jellyfish sting – Is Urine good to use

Have you ever heard people say “pee on jellyfish stings”, or “use urine for jellyfish stings“.  The intention is to help by suggesting an acidic substance, however urine isn’t always acidic.

According to Dr. Lisa Gershwin, a world-renowned expert on jellyfish, don’t pee on your jellyfish sting.  Use vinegar (and urine is not a substitute for vinegar.

Unknown to many people, vinegar’s role in helping jellyfish sting is NOT to relieve the pain.  It is used to neutralize the toxins in the jellyfish tentacles.

When someone is stung by a jellyfish, they have only received about 10% of the toxin released by the jellyfish, the remaining 90% is waiting to release into your skin.  Vinegar will help ensure the other 90% is not released.

Hot water and ice also work, however, if you have a serious sting by a Box Jellyfish using warm water will open up skin capillaries and could cause further damage.

Dr. Gershwin iterates that preventing stings before they happen is the best thing to do, and it can be done by looking at the sand on the beach.

If you see jellyfish that have been washed ashore, be cautious when entering the ocean.  You can also take a bottle of vinegar to the beach (a great idea if you have small children).  Check out the video below for a quick review: