Do you know the meaning of a beach bum? No, I don’t mean someone who is homeless (not making light of that).

I am referring to a beach bum with an endearing connotation. A beach bum is someone who lives at the beach in a carefree, hippy-like way.

The slang term for beach bum is defined as “someone who loafs at the beach”.  He or she is usually younger, in their 20’s or 30’s, with a free spirit, and spends most of their days under the sun and in the water.

They likely have a place near the beach or sleep on a couch at their friend’s house.

In this article we’ll look at the most common characteristics of a beach bum. After reading this you might realize you’re a beach bum or know someone who is. If so, share this article with others for a laugh!

I grew up spending a lot of time watching people at the beach. Most people, like me, came during the day for a few hours in the summer.

I was after the sun, the waves, and a tan although I usually returned home sunburned.

The beach was my favorite place throughout the year (even when the weather wasn’t as warm) but I never became a “beach bum”.  I always spotted the beach bums and recognized the same guys and gals from year to year.

They were easy to spot because of their tan, shaggy hair, surfboard, and occasional smoking.

The beach bums I observed were cool guys and girls and always attracted the attention of beach tourists because they looked the part. After all, who wouldn’t want to spend all day at the beach on a daily basis?

Characteristics of a Beach Bum and Meaning

A beach bum usually has shaggy unkempt hair. They have more important things to do than get a haircut. Sure a buzz cut would only take a few minutes to clean things up but the shaggy hair fits is part of the beach bum look.

Salty, matted hair isn’t unusual. If the original hair color was brown or blonde then the sun and salt will lighten it naturally (when I was young I had brown hair in the winter and blonde in the summer). 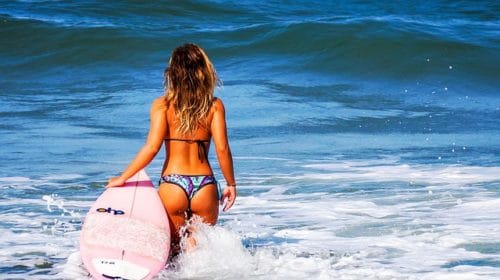 Their tans are accompanied by a fluorescent white under their swimsuit. If the beach bum is a surfer, which he/she most likely is, they might use zinc sunblock on their nose every day.

Believe it or not, beach bums these days use sunscreen and will likely prefer an all-natural sunscreen that’s safe for humans and the ocean.

No shirt, no shoes, no problem! Given their location, beach communities are tolerant of half-clothed customers. Beach bums have little need for shoes or sandals.

They’re at the beach every day walking the sand and swimming in the water. Their feet have callused and become immune to the dangers of hot concrete or parking lots. And they’ll never have sock tans!

If the beach bum is a throw-back, he/she might have a VW Van or Beatle with a surfboard rack on top. Neither are common these days but they are a telltale sign of a beach bum from the 1970’s.

There are plenty of other beach bum cars too. A Studebaker, station wagon or mini-RV comes to mind.

These days a Toyota Tacoma pick-up truck with dream catchers hanging from the rearview mirror might be the equivalent to the old cars.

A beach bum meaning is also likely to be a pot smoker. In California marijuana is no longer outlawed so expect to see smoke billowing out of their vehicle as they park at the beach.

Beach bums rarely buy their own pot, so they’ll make a lot of friends at the beach to mooch off. After all, sharing is caring.

Beach bums tend to lack eloquence and often suffer from speech dysfluency (yes it’s a real thing). “Like” and “Dude” are filler words and although they have real meaning in conversation beach bums use them when unnecessary or to give them more time to grasp for words.

“Cali girls” get a lot of credit for using “like”, but we believe it originated from the beach bum, surfer lifestyle.

7. College for a long time

Not surprisingly, beach bums often come from working-class families and sometimes from affluent families. They simply like the carefree lifestyle of being a beach bum or are buying time until their trust fund kicks in.

When in college (whether a community college or reputable university) beach bums usually take their time. In the movie Tommy Boy there were no beach bums but Chris Farley could have been mistaken for one when he said:

Beach bums are always sandy. They usually wear the same clothes over and over (tank tops and swim trunks). Because they don’t wear shoes their toes are always full of sand and so is their hair.

A look inside their car and under their bed sheets and you’ll find plenty of sand on the floor and on the sheets (don’t ask me how I know).

8. Still getting help from parents

As we mentioned above there’s a good chance the beach bum is still being helped by their parents. It’s fine if they are, but don’t confuse a beach bum with someone who is really homeless.

If the beach bum is panhandling in between sets of surf then he/she might be a legitimate beach “bum”.

Beach bums are known as loafers. It’s not just because they don’t like to work, rather it’s because they move at a slower pace.

In some ways it’s nice. Beach bums are rarely in a hurry and don’t get caught up in the hustle and bustle of everyday life. They understand that the meeting WILL happen and the work WILL get done, however, it might not be time-efficient.

One place where beach bums don’t loaf is while surfing. After all, the waves wait for no one.

Many beach bums are also environmentalists. They take care of their beaches and clean up their own, as well as others, waste.

Beach bums might have many negative characteristics but they usually appreciate the natural world around them. They spend all day outdoors, enjoying the fresh air, warm sun, and waves and they’re aware of the delicate ecosystem surrounding them.

Beaches and bars go hand-in-hand. If you frequent a popular beach, chances are there are plenty of bars, both tourist and local, to quench visitor’s thirst.

Beach bums often find part-time jobs at or near the beach, and while a lifeguard might be too intense for a beach bum, a bartender might be the best gig to earn some board and beer money.

In this article, we discussed beach bums, in the traditional description. I hope you have a better idea of the beach bum meaning. Beach bums are usually young guys and gals who make a home at the beach, either in their own beach bungalow or on a friends couch.

They spend most of their waking hours at the beach with friends, tanning, and surfing. Their shaggy hair, dark tans, and shoeless feet give them away.

There’s also the type of car they drive, their smoking habits (or not), and their lackadaisical attitude to time and getting things done.

Although I wasn’t a beach bum, I spent years watching beach bum-types at the beach. They were cool and carefree. Obviously, I hope you accept this article as a fun joke. What it means to be a beach bum could be different to all types of people.