Making a message in a bottle is easy.  The process is simple and something that kids of all ages can do with the help of their siblings, parents, or grandparents.

Creating a message in a bottle makes a great activity for the beach (even though it’s littering) and it’s a fun DIY activity for kids before a trip to the beach. It can also be a fun date idea for young (or old) couples.

There’s something about writing a message, putting it in a bottle, and watching it float away into the great blue sea.

Lessons Learned With A Message In A Bottle

When I was young I spent a lot of time at beaches in California. I grew up watching movies of pirates and people lost at sea and I heard stories of old sailors who sent SOS messages in a bottle.

Some messages were sent in hopes they would reach their lovers or families. Others were sent as a time capsule to share an event or historical perspective to future generations (read the history of messages in bottles).

In the 1990’s I visited my grandparents who lived near the beach in Southern California. My grandmother sat me down and said “before we go to the beach we’ll write a message, put it in a bottle, and share it with someone in the future.”

I remember contemplating what I would write and I imagined what shores my bottle would wash up on. Who would find it?

Although I don’t remember exactly what I wrote, I shared what was important to me as a 10-year-old. I shared my contact number in case someone found it.

20 years later I still haven’t heard from anyone about my bottle, however, I still look for similar bottles when I jog on the beach and I hope that one day someone will find it.

I’ve composed this article with hopes that you or your children can enjoy the same DIY beach activity that I did so long ago. Let’s get started!

Craft Supplies for a DIY Message in a (Wine) Bottle 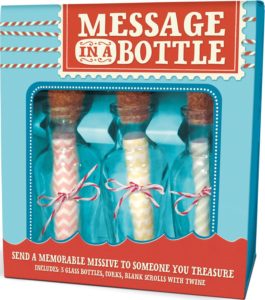 The items you need are minimal and you’ll likely have them around the house. A message in a wine bottle works great but make sure it’s clear so whoever finds the bottle will see that there’s a note inside.

If you prefer, type and print a letter, but there’s something more personal about a hand-written letter. Think about the person who finds the bottle.

If they see a typed letter I don’t think they’ll feel the connection they would if it was hand-written and as a result, they might not be inspired to reach out to you.

Make sure you don’t use a pencil, as it can fade over time and is affected by moisture. The dirt and lighter will help add an aged feel to the letter. These are optional but fun things for kids to do.

Lastly, consider adding a coin, ring, photo, or any other fun items that would fit inside a bottle. Remember, people love finding interesting things on the shore.

Message in a Bottle Preparation 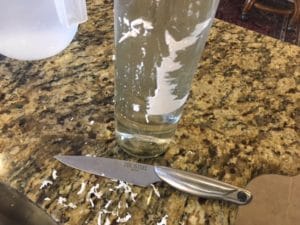 I imagine most people will opt for a message in a wine bottle. To prepare the bottle, first gently peel as much as the label off, using your fingernails.

Once the label rips it will be hard to remove but try to get as much as possible before soaking.  Next, soak the white wine bottle in hot water and dish soap in the sink.

After 10-15 minutes take the bottle out of the water and use a knife to scrape away the remainder of the label.   The label will scrape off and the result will be a see-through bottle with gooey residue from the glue. 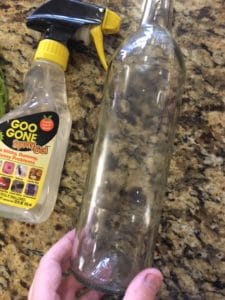 I used Goo Gone spray (check price on Amazon) – it works great for removing labels of all kinds! If you’re in a hurry you don’t need to remove the label because the ocean will naturally clean the outside of the bottle.  A few days at sea the label will scrub clean off.

Message In A Bottle Letter Ideas: What To Write

Now that you have your materials, you need some substance. What will you write as the message?

The possibilities are endless. Writing examples could include:

Funny Messages To Put In A Bottle

#1 Message in a Bottle Lyrics

#2 Write a Letter from Kevin Costner or Meg Ryan, a la the Message in Bottle Movie

#3 Sign the letter by a famous person (example: George Bush)

#5 Recommend a restaurant in the area

#6 Ask for a loan, money, or put your business card in the bottle and say “you’ve got a great deal for them”

#9 Include a small army figure in the bottle and make the letter from him: “Hey, I’m stuck in a bottle, help me!

Cute or Romantic Message In A Bottle Ideas

Quotes for a Message in a Bottle

How to Make a Letter Look Old 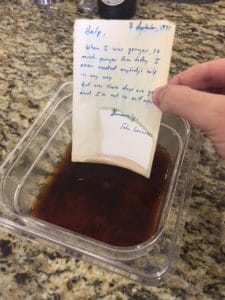 Lined paper is a give away for a modern letter. If possible use a blank sheet of paper, preferably journaling paper that is natural color (yellow/beige) and not white.

Journaling paper is usually thicker and will hold up well over time.

Put Tea Bags on a Letter or Dip in Tea

Dip the tea bags in water first or make tea, then use the bags on the paper by rubbing the wet tea bag over the paper.

The tea will stain the paper, making it look old and worn once it dries.

Rub Dirt on a Letter

You can also rub some dry dirt over a paper. If you have dark compost it can have a similar effect as the tea bags.

Kids love getting in the dirt and it gets them outside. Just make sure the soil isn’t to damp because you don’t want mud on the letter.

Burn the Edges of a Letter 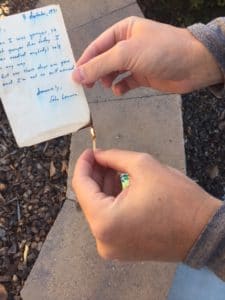 Burning the edges of a letter in a bottle makes for a classic look. If you’ve ever seen a treasure map or pirate letter it always seems to have burned edges. If you’re going for a dramatic look, consider doing it.

Make sure an adult is around to light the letter on fire. I recommend rolling up the letter and lighting the rolled end on fire.

Once lit, immediately blow out the fire and repeat on all sides. Be careful to keep the letter flat.

If one side of the letter is higher than the lit side, the fire will quickly climb. Burn the edges over concrete, a pan, or another no flammable surface.

How To Seal A Message In A Bottle

Inserting a cork back into a wine bottle isn’t a complicated process. It will take some strength and twisting to help get the cork down in the bottle.

Re-corking the bottle will take some elbow grease.  I wasn’t sure about the cork seal in the ocean so I added some superglue.

Superglue the cork at the rim of the bottle.  It will help ensure the cork doesn’t come out.

If you really want an old-style look, use a cork that isn’t branded with a company logo.  A plain cork is best!  And make sure you don’t buy a twist-off wine bottle as I did!

How To Send A Message In A Bottle Out To Sea 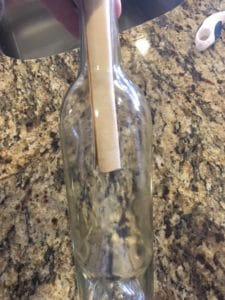 The best way to get a bottle out to sea is by boat, however, if you’re like me, this probably won’t be happening. When I did this DIY activity, I threw my bottle in the water from a pier.

I was careful to do so when the tide was going out to sea.

If you put a bottle in the ocean when the tide is coming in, then the bottle might not make it very far. Check the tide here before you take your trip to the beach and find a time when tide begins to recede.

Also, don’t throw it in the ocean near a lot of other people – after all, it’s still considered littering and there’s a possibility you can be fined.

Message in a Bottle Stories

The oldest message in a bottle ever found was discovered in 2013 on the shores of Germany.  A retired post office worker happened to find the bottle on the beach.

What she found was amazing.  In 1906 a scientist from Britain sent out over 1,020 bottles and his goal was to examine the role of tides and currents in the ocean.

Many of his bottles were discovered and returned to Britain, however, a couple hundred remain at large.  The bottle that was found in Germany was discovered in 2013 and the note it contained provided a reward of one schilling to the person who found the bottle.

All that the scientist needed was the location and date the bottle was found.

Another message in a bottle story is that of Mr. Harold Hackett who started writing messages as a hobby in 1996.  Since 1996 he’s sent 4,800 bottles and received messages from over 3,000 people who have found his bottles.  In each bottle, he shares information about himself and his address.

He never shares his phone number because he wants people to communicate the old fashioned way – there’s something about getting a letter in the mail.

He keeps in touch with many of the people who find his bottles by sending seasonal letters like Christmas cards.

If you’re wondering if a message in a bottle works, 3,000/4,800 bottles found is a pretty good response rate.

Read about more message in a bottle stories here.

In this article, we reviewed the DIY process of making a letter in a bottle.  The activity is simple for kids or for hopeless romantics and most of the materials can be found around the house.

Use plain paper, dip in tea or rub with dirt, burn the edges, clean a white wine bottle and re-cork the bottle.

Sending your message out into the unknown is a fun activity that you will remember for years (just like I have).