Picture yourself on a tropical island with white sand, surf, and you guessed it, coconuts! When we envision a tropical paradise we often think of palm trees and beaches.

Palm trees are a big part of beach life but have you ever wondered why palm trees grow near the ocean?

There are many types of palms but coconut palm trees have adapted to fully appreciate the beach. They grow near the ocean because they have the ability to convert salty water into fresh water, they enjoy sandy soils, thrive in competition-free sunlight, are wind tolerant, and they even use the sea to distribute their seed.

Did you know there are at least 2,500 different species of palm trees? There are ornamental palms that are bred for landscaping and palms that are cultivated for oil, dates, and nuts.

A common characteristic of palms is they do well in hot climates, however not all palms grow well near the ocean. The coconut is a special palm that has adapted to thrive in environments near the sea.

If you’ve never seen a coconut palm you’re missing out! These palm trees grow on or nearby the beach in tropical climates all over the world. In America, coconuts are found primarily in two States, Florida and Hawaii. 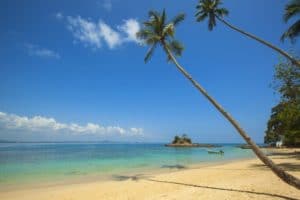 While on the tree, coconuts are covered in a green husk that eventually turns into a brown seed. Coconuts can be picked from a palm tree but given time they will fall to the ground naturally.

Coconuts are a miracle plant that can be used for all kinds of things.  It can be used as a drink, eaten as food, and is a component in many beauty products and skin moisturizers. The husks of coconuts can be used as fuel and for items like buttons.

The leaves of coconut palms are long, thin and fibrous and used to weave baskets and rooftops in tropical countries around the world. Suffice to say, coconuts are extremely useful!

Why Do Palm Trees Grow Near The Ocean: Adaptations!

Most people realize that few plants can live near the ocean. The water is salty (which plants don’t like) and the soil is considered poor (too sandy). If that’s the case, why do coconut palms do so well?

There are a number of reasons palm trees grow well near the ocean. These adaptations have taken place over a long period of time and have allowed the palm to be one of the most unique plants on earth.

Salt water kills most plants but not coconut palms. This palm is part of a group called halophytes which have the ability to convert salt heavy water into useable water.

This is an awesome ability to have. The process takes place in one of two methods.

Most plants perform poorly in sandy soils. Sandy soils tend to have more soil structure and are unable to hold onto organic matter (which provides many of the nutrients plants need like nitrogen, potassium, and phosphorous).

Because the palm grows near the ocean it has an endless supply of moisture and because it can tolerate high salinity it thrives!

3) Coconut Palm Trees Use The Sea To Distribute Their Seeds

This adaptation is amazing! Plants evolve in many ways and one of the most important things a plant can do is to reproduce. Just like humans, plants live to reproduce and pass on their genes to the next generation.

Some plants use birds to redistribute their seed, however, coconuts are too heavy for a bird to carry. Instead, coconut palms use the ocean and it’s one of the reasons palm trees tend to lean towards the water (they are rarely growing straight up).

When a coconut falls onto the beach a tide or storm will eventually pick up the seed and carry it out to sea. Coconut seeds float and eventually the current will deposit the seed on another beach where it can begin growing. It’s fascinating to think about!

Since few plants can grow on the beach, coconut palms have a monopoly on sunlight. Plant leaves work just like solar panels.

They require sunlight for photosynthesis and if there are many other plants growing in the area some plants will fail (especially when plants are young).

There is little competition on the beach so these palms can soak up all the sun without having to compete for sunlight!

Bushy trees and shrubs don’t do well in windy environments, however coconut palms are super thin. This is a great adaptability for the beach because many beaches can be windy.

Even though you’ll see coconuts palms growing at strange angles you’ll rarely see a palm that’s fallen over due wind.

We think of palm trees when we envision a tropical beach. They’re usually the only tree growing on the beach and they look cool. Sometimes they grow straight and other times they are curved.

Not all palms can grow on the beach. After all there are over 2,500 different types. Some produce nuts, others oil, and some palms are simply for aesthetics.

All palms enjoy the warmth and tropical climate but not all can survive so close to the ocean. Coconuts are special because they can tolerate salty water, thrive in sandy soil, and because they provide water, food, and minerals that we use everyday.

If you’re not familiar with coconut palms I hope this article shed light on why they are so amazing. Drinking coconut water directly from a coconut is one of my favorite things to do while sitting on the beach. And it’s delicious!