We’ve all grown up with pirate stories. We learned about pirates and their lingo in movies and read about their buried treasure in books. We romanticize the pirate lifestyle of sailing the tropics and drinking barrels of rum however the truth cannot be more different.

Pirates were around long before they were popularized in the Caribbean and still exist today. The Vikings were definitely pirates and travelled by sea to pillage other lands. Today pirates exist off the coast of Somalia and in other parts of the world.

Modern day pirates use technology and high speed boats rather than wooden ships and sails. They approach ships and threaten them with violence in exchange for money.

Part of our love affair with pirates comes from our infatuation with treasure. It’s every boys (and many girls) dream to find a treasure map leading to buried treasure.

Historians think treasure maps are merely a legend and buried treasure likely isn’t real because fellow pirates would never let a captain hide what was rightfully theirs. In addition, historians believe that pirate ships were relatively democratic and elected their captains to provide leadership in battle only.

One thing most historians can agree on is the vast amount of treasure lost at sea that’s waiting to be found. The following shares some interesting, and fun, information about famous pirates of the Caribbean.  Enjoy.

Facts about Pirates in the 17th and 18th Century 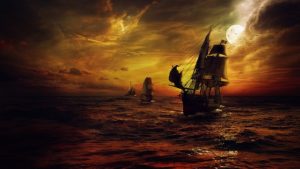 The earliest pirates of the Caribbean were originally called buccaneers. Buccaneers was a French term used to describe the process of making jerky, or dried meat (jerky makers).

Most of the buccaneers were from France, England, and Holland. They were vagabonds, drifters, who realized an opportunity to live in a new land, the Caribbean, and process and sell dried meat.

During the early 1600s, the islands of Hispaniola, now the Dominican Republic and Haiti was a hub for buccaneers. Unfortunately they occasionally double crossed sailors they traded with and as a result the England and France decided to kill the livestock on the islands.

While reducing the livestock population stopped the buccaneers from processing dried meat, it left them with few options to earn a living. As a result, many of the buccaneers started sailing in the Caribbean and taking advantage of ships unable to defend themselves.

During this time many countries were vying for power in the new world. The English wanted to create a presence in the Caribbean and were fighting against the Spanish for land.

English hired buccaneers to attack Spanish ships and agreed that the buccaneers could keep the bounty after their battles.

There were many countries against each other and became rather confusing. Private sailors from England, known as privateers, also joined in the fight because they could make money, and it was much cheaper than employing England’s own navy.

Henry Morgan was one of the most famous private sailors and his raids on Caribbean strongholds were legendary. He was called a pirate by the Spanish and made off with a lot of gold. He later was knighted by King Charles II and named the governor of Jamaica.

As decades progress so did the war in the Caribbean. England and Holland joined forces against France and Spain which was called Queen Ann’s War. Eventually, the war ended and Spain recognized the legitimacy of trade for the opposition.

The losers of this peace treaty were the privateers who lost their jobs. Thus a boom in piracy took place as European ships transported gold and other goods to and from the Caribbean to Europe.

Pirates became enemies of all countries and every ship was fair game! As the economy grew in the new world, trade increased with sugar production, gold mining, and slavery. The Caribbean was the perfect place for pirates because there were so many uninhabited islands to hide.

Related: Make a DIY Message in a Bottle

Shiver me timbers! September 19 is International Talk Like A Pirate Day. It was created in 2002 as a way for pirate enthusiasts all over the world to unite, share a love for pirates, and share pirate terminology, slang, and sayings from yesteryear.

On this day (and all other days) pirate enthusiasts are welcome to talk (and dress) like a pirate. This can be done with a DIY homemade pirate costume or a more simplified newspaper pirate hat.

If you need a kick in the dungbi, we invite all scalleywags to shake a leg and join the pirate community. Waste no time, batten down the hatches, and take part in this yearly activity. Just remember….dead men tell no tales!

Significance of the Pirate Flag 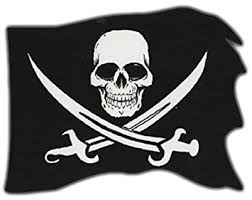 The pirate flag is the most famous identifier of pirates.  In modern times it’s still ubiquitous with danger.  Sports teams even use it as a logo.  The black flag with skull and crossbones is called the Jolly Roger Flag.

The pirate flag was designed by Calico Jack’s first mate, Karl Starling.  It became the most common flag of pirates in the 1720’s.  Historians believe the pirate flag’s origin date back from earlier pirates from Europe and Asia including the Muslim corsairs who flew a black flag and skull.

Blackbeard and other pirates used other black and white pirate flags albeit with red color as well (seen below).  These variations are all intimidating but the simplicity of the skull and crossbones has kept its popularity for good reason. 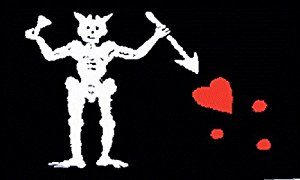 Caribbean Pirates fist got their start as hired crews for battle against the Spanish and French. Most pirate ships were smaller, faster vessels that maneuvered well in the ocean.

They also rarely flew their pirate flag so as to not be seen. Sometimes they would fly other countries flags to confuse or trick ships at sea.

Edward Teech, aka Blackbeard captured one of the largest ships (Concord) and used it has a pirate ship. The Concord was built in 1710 in Bristol for the French.

Once Blackbeard captured the ship he renamed it Queen Ann’s Revenge, added more cannons, and became a force to be reckoned with. The ship was found off the coast of North Carolina in 1996 with it’s cannons loaded!

Pirate words may seem tough to learn but if you’re getting ready for international talk like a pirate day, then you should have some terminology prepared.  The vocabulary isn’t expansive, as it’s focused around booty, rum, sailing, and greetings.

Check out the list below for some classic pirate slang.

Shot across the bows – a warning shot

All at sea – at a state of confusion

Anchors aweigh – on our way

Batten down the hatches – secure the deck and hatch for rain

Broad in the beam – fat around the hips

Three sheets to the wind – drunk

Walk the plank – death into the sea

He’s a hornswaggler – someone who gets the better of another

Dance the hempen jib – hanged by the neck until dead

Ships ahoy – use to attract attention or say hello

Blow me down – express of surprise 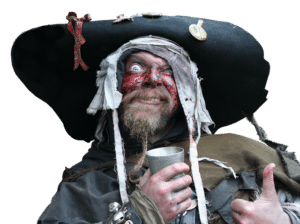 Weigh anchor and hoist the mizzen – pull the anchor and sail, let’s go

Yo ho ho and a barrel of rum – happy with rum

Davy Jones locker – means the bottom of the sea

Jolly Roger – the flag most commonly associated with pirates

That there scallywag – a scrub who shouldn’t be trusted

Seadog – sailor or dog at sea

What Does Batten Down the Hatches Mean

This means to secure the hatches on the deck. It is done primarily when there is rough seas or weather ahead.

Battens are strips of protection that keep water from going below deck.

No. 1 Question: What do you say to a pirate captain with both eyes

No. 2 Question: Why do Pirates go to strip clubs?

Answer: To get the booty

No. 3 Why can’t pirates say the whole alphabet?

Answer: They spend years at sea

No. 4 Question: Why did the pirate say “shiver me timbers”?

Answer: His wooden leg was stuck in the fridge

No. 7 Question: What was the pirates best punch?

Pirates of the Caribbean Quotes

No. 1 Norrington: You are without a doubt the worst pirate I’ve ever heard of

Jack Sparrow: But you’ve heard of me

No. 2 Captain Barbossa: The moonlight shows us what we really are

No.3 Will Turner: This is either brilliance or insanity!

No. 4 Jack Sparrow: I’m dishonest and a dishonest man you can always trust to be dishonest. Honestly, it’s the honest ones you want to watch for because you can never predict when they’re going to do something incredibly stupid.

No. 5 Jack Sparrow: Nobody move! I dropped me brain

No. 7 Jack Sparrow: Did everyone see that? Because I will not be doing that again.

The following are a few fun pirate names for pets. Some of them are simply words, but others are names of famous pirates. I think it’s fun to put Mr. or Captain in front of a pets name.

In this article we shared an introduction to pirates and their emergence in the Caribbean (Pirate 101).  Buccaneers started out as drifters looking to make a buck from jerky in the Caribbean.

From there they were hired guns to fight a war against other European countries and once the war finished, they lacked an opportunity to make income (or they decided a life a crime).

As pirates they roamed the Caribbean and Atlantic, picking off ships going to and from Europe and Africa.  There were battles with the same countries that once hired them to fight their battles and there was much money to be made.

Adventurers today continue to search for treasure lost at sea and find reminisce of pirate battles at sea.  There is a lot to learn from the pirates of the Caribbean including pirate lingo, pirate names, and pirate quotes.

If you’re at sea, be sure keep an eye out for the Jolly Roger pirate flag or you might be soon dancing the hempen jib.